We like attending meetups because we believe that great ideas are created when we share our experience and knowledge. That’s why we decided to organize regularly an IT security meetup in our town, Debrecen. On 24th August, we held our third meetup and we are so happy that the number of the attendees is increasing.

Not only did the cold beer and the delicious pizza attract participants, but so did the interesting topics we were discussing. The most recent topic was: IT security misbeliefs. 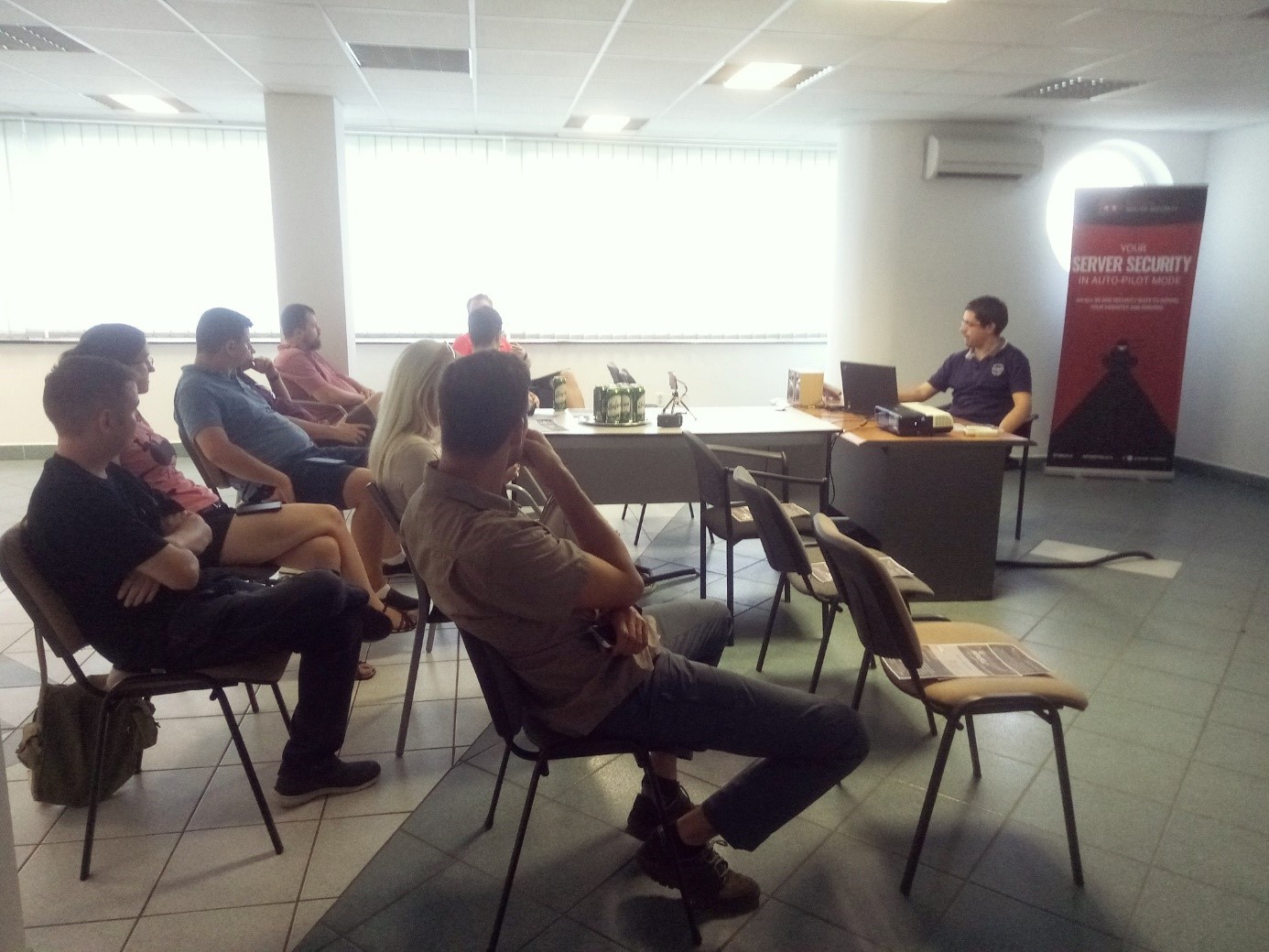 1.“If I’m using a strong password, everything is OK.”

Most people believe that if they have a strong password, they don’t have to worry anymore. The first question is: what is a strong password? Here is the typical answer: It contains upper case, lower case, numbers, other symbols and it should be at least eight characters long. Some may think: “OK, that’s not a big deal. I can create a strong password from the date of my birthday which suits these requirements and I can easily memorize it.” But is it enough? Do you think 1987September7 would be a tricky one for hackers? We don’t think so…

So instead of spending hours thinking about what your strong password, there’s an easier way. Let’s generate one! There are many tools which can create a generated password. For example, this is a randomly created password: 2qZ,B@vwqx{m

OK, you have a strong password now and here comes the second big mistake that people usually make. They are using this only one strong password in every platform. There’s no problem until your password is really in secret. But what if the hacker figures it out? The consequences are obvious: the hacker will be able to login to all of your accounts.

If you’d like to avoid it, it’s recommended to use different passwords on each platform. You could ask: „But how I’m going to remember to all of these passwords?”. The answer is Password Manager Apps. The most popular tool is the LastPass, but you can find different alternatives.

During discussing this topic, some other ideas came up as an alternative of generated passwords:

And last but not least, if there’s an option for 2-factor authentication, don’t hesitate to enable it in order to increase the level of protection.

There are also new trends in this field to avoid hacking attempts: 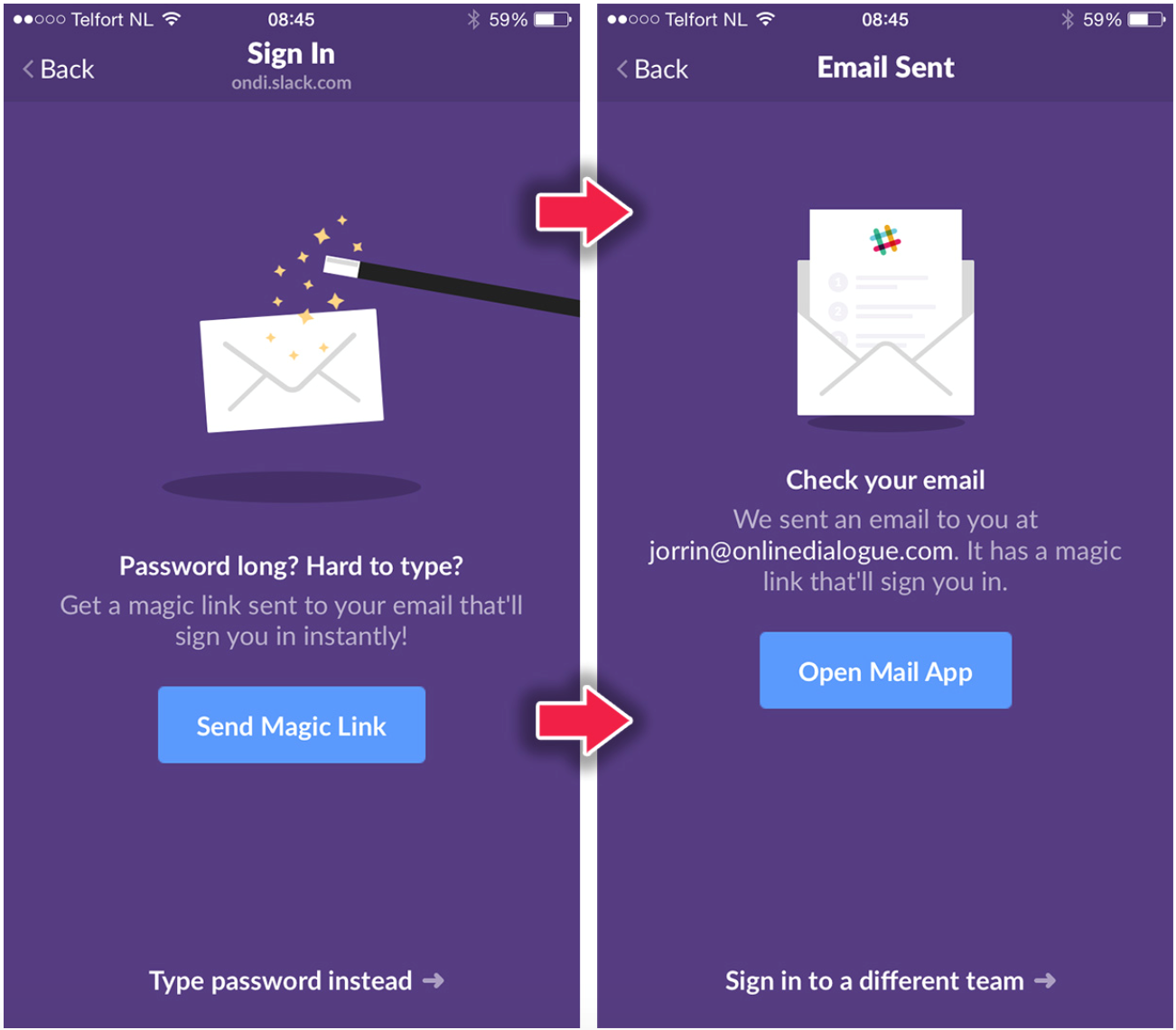 A lot of people use VPN, and for various purposes; for example when they want to watch a video which is blocked in their home country. Unfortunately, there are other reasons, which involve illegal activities. You may think that you can hide behind the VPN and your activities won’t ever come to light. But it’s not true. VPN providers store logs about your activities, and in the case of a court order, they must provide the requested data to the authorities.

3.“I don’t own important information, so I’m not a target of cyber attacks.”

Nowadays most attacks are not targeted. According to our logs, 90-95% of the incidents come from botnets. A botnet doesn’t care about the kind of information you store. And you may think that you don’t own important data, but for others, everything can be important. Let’s just think of the custom advertisements. In the marketing field, anything can be useful. Did you mention to your friend on a chat that you’d like to buy a cross-country car than you start to see cross-country car advertisements everywhere on the internet? Wondering how is it possible? As we mentioned, any small detail can be important, even if you don’t think it is.

Another example: Before World War II, there was a population survey where the religion was registered too. Everyone knows what Hitler did two years later. So we can never know how our data will be used against us in the future.

Furthermore, if you believe that your server doesn’t contain sensitive data, hackers and bots can still upload phishing content to your websites. We are sure that you don’t want to be a part of a botnet.

4.“If my device is hacked, I will notice it immediately.”

It’s almost true. Fortunately, it’s rare that HTTPS isn’t safe. But there’s a vulnerability which was unknown by many people for a long time: LOGJAM. This attack allows a man-in-the-middle attacker to downgrade vulnerable TLS connections to 512-bit export-grade cryptography. Huzaifa Sidhpurwala held a presentation about this topic in the DevConf as well.

The default port for login via SSH is 22. If you decide to use another port instead, it makes things more difficult, but not for the botnet because the “smarter” botnets check not only port 22. It will still find the port used for login and only you and/or your team will have more difficulty remembering the exact port you are using.

After discussing the most frequent IT security misbeliefs, we continued talking about other interesting topics. Let me give you a little insight about them, in a nutshell 😉

We were in a nostalgic mood, so we talked about events which happened before we created BitNinja. Then, they were nightmares, but now, we were laughing at them. There was a case when our servers were hacked and we could see that the hacker was crawling in our database. It was really annoying to see it but we couldn’t do anything about it. We also saw on a map where these actions are coming from. It was easy for the police to find the attacker, but as it turned out, they were zombie servers.

The user agent can tell a lot sometimes. There are lazy botnet writers, who leave the “python request” in the user agent: 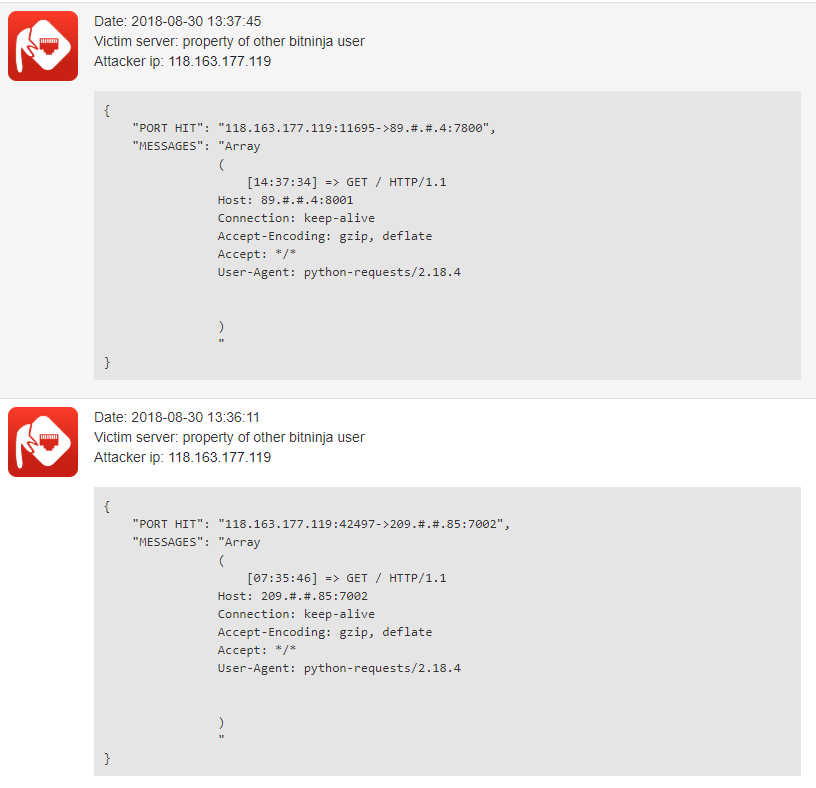 If we analyze the User Agent a bit deeper, we can figure out that in many cases the user agent is spoofed. Last year, there was a botnet which used the following user agent: Mozilla/5.0 (Windows NT 6.1; WOW64; rv:40.0) Gecko/20100101 Firefox/40.1. It looks normal but if you do a little research, you’ll figure out that it’s not a valid one because there is no 40.1 version of FireFox.

We talked a lot about how the importance of AI is increasing from day to day. It looks like this is the future. We are going to use this technology in our upcoming developments, but they are top secret so we can’t share a spoiler about them. 😉

There are always some trends which rule in the cyber attack field. Nowadays, IoT botnets are rising up, but there are some old attack types which never will go out of fashion: 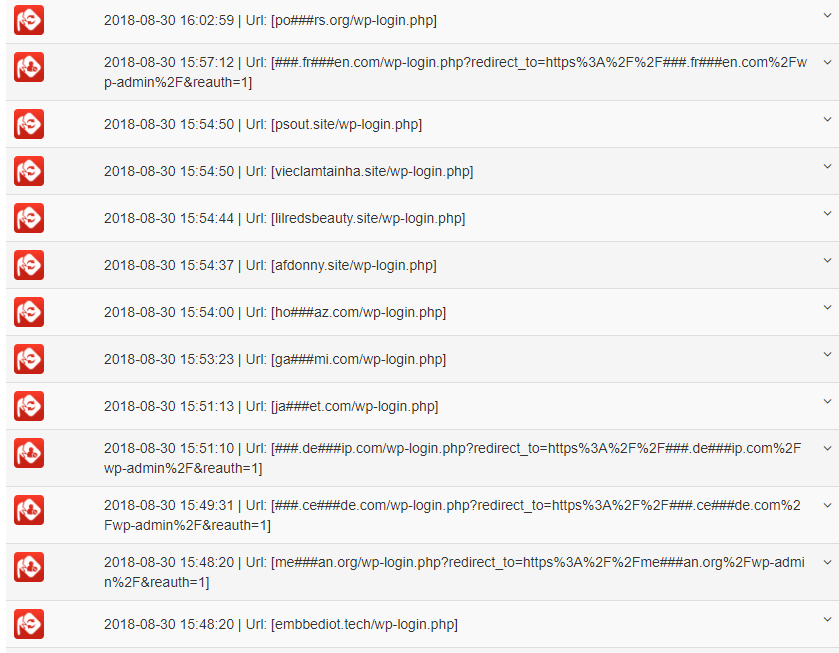 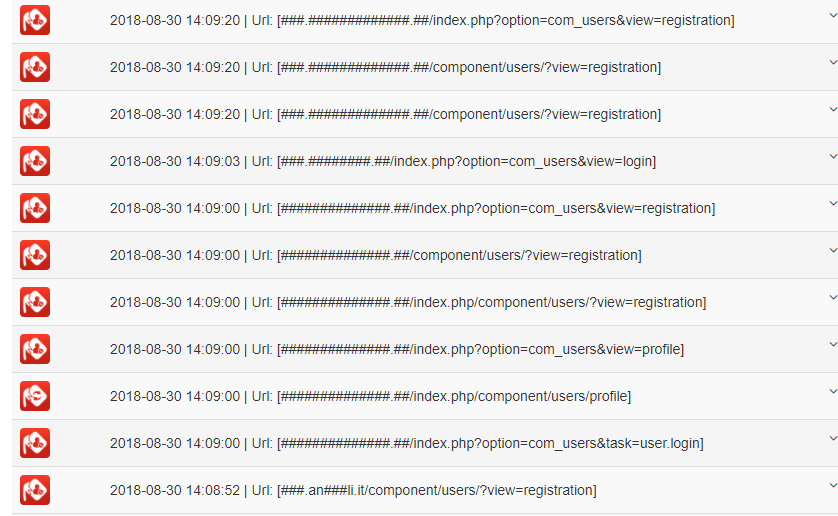 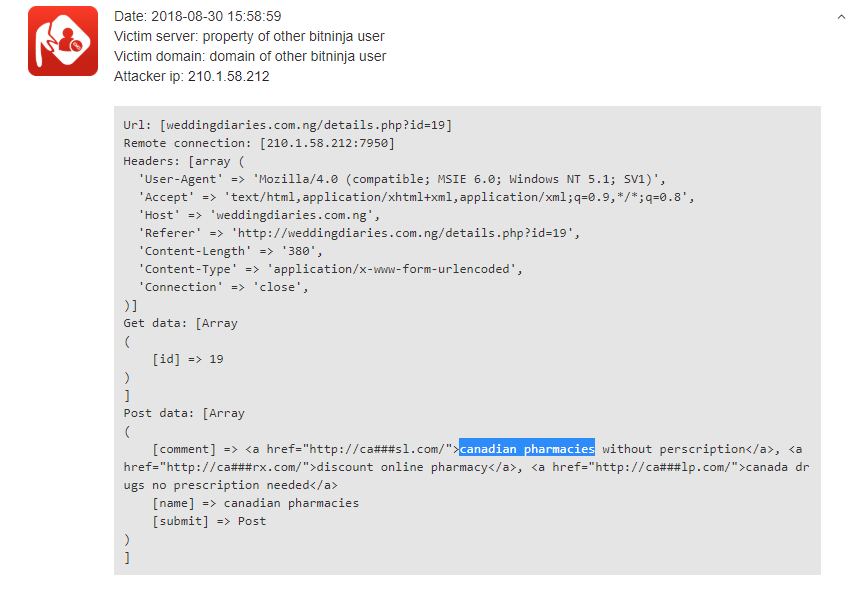 Besides the well-known attacks, two funny incidents came up as well:

Windows is an easier target for the hacker and of course, there is more malware for them. However, just because Linux doesn’t have a concept like “.exe” in Windows, it is not necessarily safer than Windows. Let’s just think to Shellshock or Linux kernel vulnerabilities…

We could talk a lot about the Linux – Windows comparison, but it’s another long story, so we are going to publish an article about it.

Do you have to be an expert in order to be a hacker?

The answer is “no.” Nowadays a lot of things are available to the public (e.g., Github) so it’s not so difficult to become a hacker. Just an example: there was a scriptwriting competition for kids where the voting systems were cloned and one of the meetup’s participants read somewhere that seven out of 10 participants could hack them.

The weakest point is always the people. Businesses should put more focus on educating their customers because sometimes really silly actions from their end result in them getting hacked. Hopefully, in the next 15-20 years, a new generation will consider IT security as a basic necessity.

It’s normal for people not to care about security until something bad happens. But a reactive attitude is not the best solution. We believe in proactive protection and encourage everyone to do the necessary actions in order to be safe.

As you can see we talked about many important things and the success of our meetups are obvious. This event already appeared in our town’s (second-biggest one in Hungary) newspaper and the interest to the next meetup was high from the attendees. Thanks to these great outcomes we decided that we are going to organize the meetups more frequently. Instead of quarterly, there will be meetups every two months. We’d also like to invite a guest presenter to our next meetup.